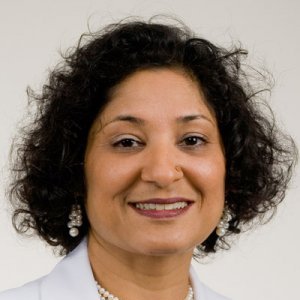 Dr. Gul Afshan's areas of expertise are in microbiology and biomolecular engineering.

Dr. Gul Afshan is a biochemist/molecular biologist with a passion for studying microscopic objects and genome science. She founded the undergraduate biomolecular engineering degree program at Milwaukee School of Engineerig and firmly believes all students should have an insight on what genome science is. Afshan teaches courses in biotechnology, chemistry, microbiology, nutrition, genomics, synthetic biology, biomolecular engineering, metabolic engineering and biochemistry in the Physics and Chemistry Department.

“The coming time is the BIOTIME … actually we are already living in it,” said Dr. Gul Afshan, associate professor in the Physics and Chemistry Department and BioMolecular Engineering program architect at MSOE. “BioMolecular Engineers are going to be truly the universal engineers of the future, capable of working all over the world in a wide range of roles and industries.”

Seminar at Kiwanis's Club on BioMolecular Engineering Advances in the society

Seminar Series on Biology and Engineering

Experiences in the Fields of Engineering

This project creates new physical models and digital instructional materials to help students understand photosynthesis, the process by which living organisms trap energy from the sun in food. During photosynthesis, green plants, algae and some microbes fix carbon dioxide from the air into organic molecules, the food upon which all living things depend. By removing carbon dioxide from the atmosphere, it also helps to control the build-up of this greenhouse gas. In addition some molecules made this way become biofuel, a renewable source of energy. Therefore this is an important process to understand. The models are used in a variety of undergraduate courses along with those previously created and tested by the SUN (Students Understanding eNergy) Project. Together these instructional materials allow undergraduates to enact both photosynthesis and cellular respiration, the process by which all living things move stored energy from food to ATP, the chemical currency required to power life. These topics are difficult for undergraduates to understand. They involve electrons moving along a particular path in protein complexes found in two cellular compartments, the chloroplast and the mitochondrion. A team from University of Wisconsin at Madison, University of Wisconsin at Milwaukee, The Scripps Research Institute, and Milwaukee School of Engineering (the lead institution) develops scale models that accurately represent the structures of the proteins involved in photosynthesis. It also creates web-based instructional materials that integrate knowledge of the biological structures with their functions. The models and digital learning tools are tested in cell biology, biochemistry, and physics classes at the cooperating institutions, and then refined for broader distribution. Ultimately they improve student learning. They also impact student persistence as science majors nationwide, since many students find these abstract concepts to be so difficult that they change their major. This project is being jointly funded by the Directorate for Biological Sciences, Division of Biological Infrastructure and the Directorate for Education and Human Resources, Division of Undergraduate Education as part of their efforts toward Vision and Change in Undergraduate Biology Education.

A BioMolecular Engineering Program at MSOE

Depletion of cellular iron by BPS and ascorbate: Effect on toxicity of adriamycin | Free Radical Biology and Medicine

A new method was developed that reduces the intracellular iron content of cells grown in serumcontaining culture without involving the significant uptake of iron-chelating agents into cells. Negatively charged bathophenanthrolinedisulfonate (BPS), together with ascorbate, caused cells to lose much of their cellular iron without causing much depression in HL-60 or H9c2 (2-1) cell proliferation over a 48-h period. When added to serum supplemented RPMI-1640 culture media, BPS and ascorbate efficiently reduced and competed for iron in Fe(III) transferrin to form Fe(II)(BPS)3. The reaction also occurred with purified human iron-transferrin. When cells were incubated with growth medium containing serum that had been treated with BPS and ascorbate for 24 h, little or no BPS2− or Fe(II)(BPS)34− entered the cells, according to direct measurements and in agreement with the highly unfavorable 1-octanol/water partition coefficients for these molecules. However, iron was mobilized out of both cell types. After 24 h incubation of cells in this medium, there was no change in the activities of catalase and superoxide dismutase, or in the concentration of glutathione. Glutathione peroxidase was elevated 9%. Using HL-60 and H9c2 (2-1) cells made iron deficient with BPS and ascorbate, HL-60 cells grown in defined-growth media in the absence of iron-pyridoxal isonicotinoyl hydrazone, or Euglena gracilis cells maintained in a defined medium that was rigorously depleted of iron, it was shown that the cytotoxicity of adriamycin is markedly dependent on the presence of iron in each type of cell. Similar results were obtained when HL-60 cells were grown in RPMI-1640 culture medium and serum that had been incubated for 24 h in BPS and ascorbate and then chromatographed over a Bio-Rad desalting column to remove small molecules including BPS, ascorbate, and Fe(II)(BPS)3.