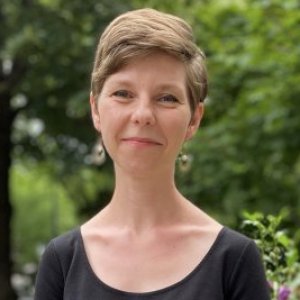 Devon Golaszewski is a historian of gender, sexuality, and medicine in 20th century francophone West Africa.

Devon Golaszewski's research focuses on the history of gender, sexuality, and medicine in 20th century francophone West Africa. Her dissertation, entitled “Reproductive Labors: Women's Expertise and Biomedical Legibility in Mali, 1935-1999,” examined how Malian families sought to ensure successful conception, pregnancy and childbirth in the context of high maternal and infant mortality. It traced the development of biomedical maternal and reproductive health programs and the changing interventions of local women specialists such as a birth attendants and nuptial counselors.

Devon is a co-founder of the Projet Archives des Femmes, a Bamako-based public archive which preserve the records of Malian women's activism for Independence, literacy programs, economic support, and health projects.

Past and Present, Volume 246, Issue Supplement 15

In the early 20th century, many young women in southern French Soudan spent the days before and after their wedding in seclusion, attended by an older woman nuptial counselor (Bamanakan màɲɔmaga). The counselor provided the bride with educational, medicinal, and esoteric interventions to ensure marital success: from special foods, to protection from witchcraft, instruction and herbal products to facilitate pleasurable intercourse and conception, and advice on good wifely behavior. After the wedding, the erstwhile bride could turn to her nuptial counselor for advice and aphrodisiac products.
The counselor was chosen and remunerated by the bride’s mother or aunt. Preparing girls to be wives was one of the central tasks of Soudanese mothering, and through the institution of nuptial counseling, important elements of this work were delegated to the specialist counselor. Drawing on archival material, women’s autobiographies and oral histories, and ethnographic observation of weddings in contemporary Mali, this article explores nuptial counseling as a form of othermothering (Hill Collins 2000). It argues that nuptial counseling was especially vital in the early 20th century, following the legal abolition of slavery by the French colonial government. People of enslaved and free descent used social practices around marriage to articulate their full-personhood. Nuptial counseling allowed the bride and her family to act as patrons and the form of social and sexual education offered by the counselor publicly marked the bride’s free status. This institution thus served as a vital form of mothering aimed specifically towards daughters on the cusp of adulthood.