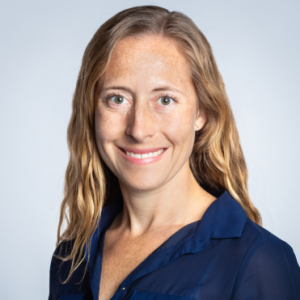 An immunology researcher and educator with experience working in both basic and translational science.

Her research career has focused on the development of novel vaccines and adjuvants, discovery of cytokines and chemokines, and tuning immune responses to vaccine formulations using adjuvants based on Toll-Like Receptors and nanoparticles.

Dr. Burkhardt has lectured and mentored doctoral, undergraduate and medical students, developed engaging course curriculum, and authored multiple patents and journal articles based on her findings.

Coxiella burnetii is an obligate intracellular bacterium and the causative agent of Q fever. C. burnetii is considered a potential bioterrorism agent because of its low infectious dose; resistance to heat, drying, and common disinfectants; and lack of prophylactic therapies. Q-Vax, a formalin-inactivated whole-bacteria vaccine, is currently the only prophylactic measure that is protective against C. burnetii infections but is not U.S. Food and Drug Administration approved.

CCL28 is a mucosal chemokine that has been involved in various responses, including IgA production. We have analyzed its production in human tissues using a comprehensive microarray database. Its highest expression is in the salivary gland, indicating that it is an important component of saliva. It is also expressed in the trachea, bronchus, and in the mammary gland upon onset of lactation.

Traditional vaccination strategies have failed to generate effective vaccines for many infections like tuberculosis and HIV. New approaches are needed for each type of disease. The protective immunity and distinct responses of many successful vaccines come from activating multiple Toll-like receptors (TLRs).

view more
Identification of IL-40, a Novel B Cell–Associated Cytokine | The Journal of Immunology

We describe a novel B cell-associated cytokine, encoded by an uncharacterized gene (C17orf99; chromosome 17 open reading frame 99), that is expressed in bone marrow and fetal liver and whose expression is also induced in peripheral B cells upon activation. C17orf99 is only present in mammalian genomes, and it encodes a small (∼27-kDa) secreted protein unrelated to other cytokine families, suggesting a function in mammalian immune responses.

view more
Cutting Edge: GPR35/CXCR8 Is the Receptor of the Mucosal Chemokine CXCL17 | The Journal of Immunology

Chemokines are chemotactic cytokines that direct the traffic of leukocytes and other cells in the body. Chemokines bind to G protein–coupled receptors expressed on target cells to initiate signaling cascades and induce chemotaxis. Although the cognate receptors of most chemokines have been identified, the receptor for the mucosal chemokine CXCL17 is undefined. In this article, we show that GPR35 is the receptor of CXCL17.

Cytokines are involved in many functions of the immune system including initiating, amplifying and resolving immune responses. Through bioinformatics analyses of a comprehensive database of gene expression (BIGE: Body Index of Gene Expression) we observed that a small secreted protein encoded by a poorly characterized gene called meteorin-like (METRNL), is highly expressed in mucosal tissues, skin and activated macrophages.