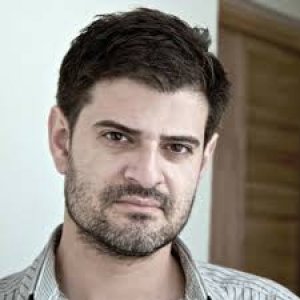 Alexandros Tsamis is an Architect and Assistant Professor at the school of architecture, RPI. He currently serves as the Graduate Program Director of Built Ecologies MS & PhD and the Associate Director of CASE. He earned his PhD in Architecture, Design and Computation and Master of Science (SMArchS) in Design and Building Technology at the Massachusetts Institute of Technology (MIT). Previously he served as the post professional graduate program director in Design at Adolfo Ibanez University in Chile, he has taught at Massachusetts Institute of Technology and the Knowlton School of Architecture, Ohio State University.

With a working definition for the Built Environment as the Effective Distribution of Material, Energy and Information in Space for Cultural Affect, Tsamis works at the intersection of Design and the Architectural Sciences. He focuses on next generation composite materials, climate adaptive - cyber physical - energy systems and advanced manufacturing technologies, as they relate to advances in Computation. He investigates issues associated with, Material, Energy and Information ecologies of the built environment at scales that range from that of the object to that of the territory. 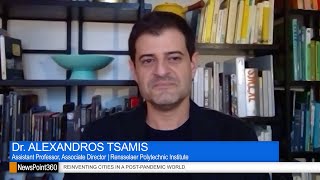 Diploma in Architecture with Honors

A pair of professors at Rensselaer Polytechnic Institute are working with researchers to develop hemp-based rebar, which is typically made as a steel reinforcement, that can be used for cement. The latest research is part of the team’s overarching effort to make construction more sustainable and introduce hemp to the industry as a carbon footprint-reducing material.

Researchers at the USA's Rensselaer Polytechnic Institute have invented an alternative to steel rebar made from hemp, which they claim avoids the problem of corrosion while cutting carbon emissions from construction. The hemp rebar could be used to support concrete structures in the same way as steel and other rebars are today, but with a reduced environmental impact due to both its material makeup and its lifespan.

... “There are some natural fibers that have a similar strength to steel for the same weight,” says Alexandros Tsamis, a professor of architecture at RPI. Synthetic materials like carbon fiber and fiberglass have such strengths, and so does hemp. When combined with plant-based bioplastic, hemp rebar could be an all-natural alternative to steel rebar. “Instead of extracting it from the earth, you grow it,” Tsamis says. ...

The Future of Cities

Cities have long been vital to the growth and health of nations. They are economic drivers and cultural centers creating community… employment… common bonds. Yet the social distancing and sanitizing necessary for saving lives during this pandemic actually go against some of the basic principles of sustainability and the shared economy. These pandemic precautions cannot last in the face of a much bigger problem: climate change.

Modeling and Simulation of a Structurally Integrated Building Energy Module

A building envelope is a substantial contributor to heating and cooling energy use. To mitigate its undesirable thermal impacts, the predominant model for building thermoregulation requires technology that maximizes the building’s insulation, while all heating and cooling occurs internally through a thermo-electrical system. Recently, a radically different model has emerged that considers the envelope as a mediator that forms a dynamic relationship in real-time with the environment. It actively exchanges heat between the interior and exterior climates to reduce the reliance on conventional heating and cooling systems. Today, a few examples are under development that theoretically demonstrate concepts and associated technologies of thermally adaptive envelopes.

We are developing a modular building energy system prototype and Modelica-based simulation methodology simultaneously through a rethinking of the way we heat and cool buildings toward a carbon-negative future. From a design perspective, we show a structurally integrated heating and cooling module, which can be applied to various opaque building elements, including a slab, interior partition and envelope. This modular building structure consists of a unique double-sided hydronic heating and cooling layer embedded in a composite structural insulated panel. An integrated intelligent computer module regulates the dynamic thermal behavior of the double-sided heating and cooling layer according to the change of environments and available renewable energy sources. From a technical perspective, we show a digital twin module developed for the proposed system by using Modelica to overcome current limitations in modeling thermally adaptive building components. To illustrate the value of this model, EnergyPlus is used for establishing a building’s geometry and general building operations, while being coupled with a Modelica-based module that dynamically changes thermal resistance values. The Functional Mock-up Interface (FMI) standard for co-simulation is used in the coupling process.

An Ectothermic Approach to Heating and Cooling in Buildings

Today, it is a well-known fact that the Built Environment (construction and operations) is responsible for nearly 40% of global energy use, significantly contributing to carbon emissions. Targeting a carbon negative future would require a rethinking of the way we heat and cool buildings, distancing ourselves from the predominant model for the building envelope as a boundary that excludes the weather and instead adopting alternatives that transform the building envelope to a mediator that actively regulates heat exchange. In this paper we explore the potential for a building boundary that actively heats and cools a building by forming dynamic relationships with its environment. Most de-carbonizing efforts today focus on realizing net-zero operational carbon either via the production and distribution – locally or through the grid – of renewable energy or via passive house strategies that target the reduction of the active energy demand. We propose a third alternative. Instead of an ENDOTHERMIC model for heating and cooling in which energy (renewable or not) is brought in the interior, transformed by an electro-mechanical system and then distributed, we propose an ECTOTHERMIC system that dynamically forms a relationship with its environment, by choosing to absorb or release heat directly from or to the environment. In this case the building skin does not act as an Insulator but instead it becomes an active heating and cooling system. From a design perspective, we will show a modular building energy system, comprised of a double hydronic heating and cooling layer. In essence, we are developing for a building, the equivalent to a vascular system that can move liquids at different locations in order to thermo-regulate.

Anthropogenic greenhouse gas emissions warming up the Earth’s atmosphere and triggering a climatic shift around the world evidence how the construction industry must provide a resilient built environment for an increasingly growing population, while at the same time reduce the use of cement and the demand for energy use from heating and cooling in an intensely urbanized world. Construction using Additive Manufacturing (AM) has gained traction in recent years, promising benefits such as: reduction in waste, building time, and need for formwork; customization and fabrication of complex geometries at no extra cost; and the reduction of human labor and on-site hazards. While most implementations of AM use cement as a primary material, development of alternative technologies that use earth-abundant, low-carbon renewable materials can be seen in projects such as Gaia by WASP, as well as efforts from the Institute for Advanced Architecture of Catalonia (IAAC). As a research framework, this project extends the efforts of building with renewable materials by developing a Functionally Graded Material (FGM) 3d Printing technology to create a bio-composite wall using lime, clay and hemp bast fiber. Unlike traditional, singular material deploying AM technologies, FGMs are a type of composite that use different materials according to where they are needed, with gradient transitioning between the materials to achieve non-discrete interphases. We work under the hypothesis that FGMs can achieve better strength-to-weight ratios than regular ceramics, and at the same time allow, through the 3d printing process, for an expression of the functional requirements of material change through form. While used in fields other than architecture, FGMs in AM have yet to be implemented in building construction.

We introduce Human-Building Collaboration (HBC), a pedagogical framework for the design of next-generation smart buildings in architecture. Using the framework’s philosophy, model, and tools we show designers how to enhance smart building performance by increasing and diversifying the ways humans have to share their intelligence with that of the building. We apply this framework through design exercises and present the result of two projects: (1) a tangible wall interface for lighting co-optimization and (2) a shape display facade interface for rainwater purification and reuse. Preliminary findings demonstrate that the framework helped designers proposing new means for humans to collaborate with smart buildings.

Contemporary voxel-based CAD software uses predetermined voxel space as a property placeholder for establishing relationships between boundaries and properties (weights). The Marching Shape algorithm, developed as an extension of the ice Ray Shape Grammar, demonstrate how similar relationships between weights and boundaries can be developed without the fixed structure of voxels. An extended Ice Ray is presented that includes rules and schemas for polygons of more than 5 vertices, rules for the manipulation of weights as well as rules that establishes relationships between them.

The recent shift of attention in the architectural discourse towards issues of ecological design, coupled with the undeniable role of computation, has already cast a new operative role to the notion of environment. Instead of being the passive, conceptualized or historicized context of an architectural object, environment is quite literally becoming the object of design itself. We are moving away from the imposed-preconceived Cartesian object which negotiates through its boundaries its presence within its immediate context. The discipline is already considering an architecture in which architectural form is only an instance of a designed environment. In many respects, this new understanding of environment aspires to be actively designed as a closed system of constant transformation, an autonomous milieu of exchange at all scales and all levels between substances, properties or qualities. The object of investigation in Software Tectonics is how technologies of design and construction allow newly forming propositions about the role of environment in the discipline to become operational tactics in the design practice. SOFTWARE TECTONICS proposes 3 design research projects. VSpace is a computer drawing application for designers. Unlike traditional CAD systems that work primarily by representing boundaries (B-reps), VSpace derives form by the representation and direct manipulation of properties (P-reps) in space. Boundaries and Properties here are considered simultaneously in the same design environment. Castit is a multi axis, Computer Numerically Controlled device that prints 3D objects by dynamically mixing at least two distinct but chemically compatible materials. Dynamic mixing allows for gradient transitions between two or more materials, resulting in objects with anisotropic material properties. CHUNK aims to eliminate a joint as a third mediating member between two building elements with an area of gradient transition. Conceived as a "dynamic insulation" architectural skin, this building technology project challenges the multi-trade and multi-component tectonics of dominant late-industrial building manufacture.

The relationship of society to its excrement is telling at both a cultural and social level. The notion of green architecture with its emphasis on the naturally pure has so far eschewed waste as a primary generative material. Alexandros Tsamis here invokes a more inclusive notion of the environment in which by‐product becomes intrinsic to any project.

Digital graft : towards a non-homogeneous materiality.

Digital methodologies have radically shifted our conception of the design process, as well as our understanding of geometry in terms of flexible relationships instead of finite positions in space. However, the material tectonic that digital means imply has not yet been explored on the basis of the new possibilities disclosed by these very same tools. Tectonic investigations have almost exclusively focused on construction techniques and primarily on the optimisation of methods that preceded the appearance of digital tools. I would argue, that computer generated architecture might imply a new understanding of matter and mass. So far, the materialization of formal expressions instigated by such processes are primarily based on techniques of assembly, which do
not negotiate the advanced levels of material complexity that the tools put forward.